Back in the USSR.
CHOBA B CCCP.
History of USSR in pictures.

History of USSR in words and pictures.

Wow, it is so good to live in the USSR! /from deep inside of soul/

Welcome back to the USSR!

What do you feel to be back in the USSR?

First publication rights USA 2017 com
Welcome back to the USSR!

Hymn of Russia offered by fans of Beatles. The old popular Beatles song from new point of view. Music, texts, figures. History of USSR in pictures.

There are thoughts of great communist theorists and practics about this page as well as thoughts of ordinary people.

What do you feel to be back in the USSR?


Sing with the Beatles!

Back in the USSR!


PS. Nostalgia, you got me again, my nostalgia...

Fridrih Engels, the nearest follower of Karl Marks. The brilliant theorist of communizm, author of many communizm related books.

Vladimir Lenin, The greatest theorist and practicer of marxizm.
Lenin has developed marxizm theory of communist scince. He has applied it in practice and USSR - the first socialist state in the world has been created. The first president (or dictator if you want) of USSR. One of the basic founders and leaders of communist bolsheviks party. The author of theoretical marxizm-leninizm books.

Leo Trotcski, The nearest Lenin colleague.
The brilliant theorist of comminizm. Trotcski had bright literary talent. Trotcski was a main Stalin opponent. He hate Stalin's theory of socialism construction in one separated country. Trotcski call Stalin as outstanding mediocrity and organizer of great defeats.
Trotcski was an internationer. He was a consecutive fighter for interests of proletariat. During political debate and intrigues in USSR in the twentieth years Trotcski has lost political fighing to Stalin. Trotcski was banished to Alma-Ata in 1928, and then outside of USSR. Trotcski continued struggle against Stalin abroad writing witty and caustic articles. Trotcski was killed by the hand of Stalin mercenary in 1940 in Mexico.

Josef Stalin, Weak theorist and brilliant practicer of communist society construction.
Talented manager. In hard conditions of internal severe political struggle between the main bosses of USSR, has gained a convincing victory. Stalin beats out all most dangerous political competitors, consistently entering in coalitions with different political blocks (with Kamenev and Zinoviev against Trotcski, then with Buharin against Kamenev and Zinoviev, then against Buharin using other people, etc).
Stalin was a very talented state manager. Having convinced in impossibility to lift world proletariat to start international proletarian revolution, he has created the theory about opportunity of socialism construction in one separated country. The external politic was carried out exclusively proceeding of USSR interests, speculating on the classes contradictions inside bourgeois states, and also using international communist organization Komintern as a powerful tool of struggle against bourgeois states. In hostile environment of bourgeois states, Stalin talently used the contradictions between them, consistently concluding the friendship treaties with one for joint struggle with others. Greatest achievement - victory USSR in 1945 in WWII against Germany, Japan, Italy in union with USA, Great Britain, France. Stalin was a dictator. He has established the extremely rigid orders in USSR, when for one incorrectly word was possible easily to receive 10 years of prison.

Nikita Khruschev, The most popular hero of political jokes in USSR.
The reason of it not only in comic appearance of the general secretary, but also mitigation of internal policy in relation to the USSR citizens. Stalin put people in prison, Khruschev put corn in ice, and also illegibly and everywhere. Khruschev become famous by an exposure of Stalin cult, but only after death of the great dictator. Furiously criticized the figures of art incorrectly displaying great achievement of the Soviet people or even not displaying at all.
In Khruschev era there was a first man has departed to space for the first time in the world. It was a popular pleasant man Juri Gagarin. Successful landing of first spaceman has caused unknown delight in USSR comparable only with victory WWII delight in 1945.
Khruschev has come very close to start nuclear war with USA (Caribbean crisis). Khruschev become famous after his performance in United Nations conference, when he knocked by the boot on a tribune and furiously abused damned imperalists. Khruschev has carried out transfer of Crime from Russia to Ukraine. In those times USSR was so monolithic formation, that the given event has passed absolutely without serious consequences and imperceptibly. Also easily and simply Ukraine could transfer not only Crime, but also, for example, Siberia or Kola peninsula.
Khruschev firmly promised to construct in USSR communizm by 1980, but as is spoken in one of jokes, Olympiad prevented.

Leonid Brezhnev, Has carried out removal Khruschev by almost democratic methods.
Improvement relations with USA. Preparation and realization joint space projects with the Americans. Brezhnev has concluded the contract PRO with USA.
By 1975 USSR becomes one of two (together with USA) main world state.
In 1979 Brezhnev began war in Afghanistan, that has resulted in sharp deterioration of the relations with USA. In 1980 has carried out Olympic Games in Moscow. USA and many other west countries boycotted these games. In reply USSR and the socialist countries boycotted winter games in USA.
The new president of USA Ronald Reigan has appeared to be an anticommunist. He thought up for USSR the extremely insulting name "evil empire", emphasizing and criticizing lacks of USSR, first of all, infringement of the rights of the man (absence of word freedom, freedom of movement, freedom of business and commerce, one-party system, formal elections, scheduled economic system, total deficiency of the goods for population etc.). Amplification of confrontation with the West, race of arms considerably have worsened USSR economy.

Brezhnev was died in 1982. He left a huge facilities, strictly speaking, absolutely in a quite good condition.

In 1991 Russia, Ukraine and Byelorussia have signed the appropriate contract about disintegration USSR and the great state has stopped its existence. Russia became free democratic, but, alas, simultaneously "kind 3" state without precise ideology, without distinct policy, lost the old friends and getting new enemies, and without the special hopes for the future for majority of population.

Great communist classics would tell us about this page...

Karl Marks: Wow! And you see, all the same, he still wanders in Europe, this our favourite and native phantom of communizm! Das ist fantastish!

Leo Trotcski: Current situation. We have got powerful revolutionary outflow. The Stalin's successors have betraid revolution. They always were traitors in soul and only waited for the convenient moment to issue this treachery. The proletariat has sufferred shattering defeat. Bourgeoisie as much as possible has strengthened the positions. But everyone, who knows marxizm-lelinizm, understands that it is a temporary victory. How long domination of bourgeoisie will be prolonged? We do not know precisely. There can be, all twenty first century. But we also precisely know, that early or late its domination will be finished, and the world proletariat will take authority in the hands. About song. It is not enough of internationalism. There are only chechens, jews and georgians. It necessary to take more widely. The victory of proletariat is possible only on the international arena, with participation of working class of all nations.

Josef Stalin: Actually all our troubles because of babblers such as the comrade, in inverted commas, Trotcski. All of you are ready to babble. But nobody could make real business, to kill all babblers, traitors, fists and bourgeoisie. Weak hands, no political will. There are no today, unfortunately, professional revolutionaries. Only babblers, such as Trotcski. People now live without a great ideal. That's bad. Too bad. People resolve all. In any business. Especially, in revolutionary work. Now about Chechen problem. I have taken out all chechens to Siberia. A question. What a traitor has returned them back? Maybe, Nikitka? Such bitch of corn.

Nikita Khruschev: Comrade Stalin! You would keep silent better. That's a shame to you! You make awful terror. You have discredited idea of communizm construction before the eyes of millions people. A problem is different. An agriculture in complete decline. It necessary to revive collective farms, and to establish the plans of corn cultivation. We have to set plan for all. For chechens, russians, jews, and chukchs. And strictly to ask for performance of the plan. If somebody will not carry out his plan, then to we have to show him the mother of Kuzma. This way we will get communizm by 2080. Or we shall carry out any sports games. Any questions? So, our purposes are clear, the tasks are put, comrades, let's start to work!

Leonid Brezhnev: Look at my photo above. It's me. I am floating, personally comrade Brezhnev, world champion in swimming and navigation. For large ship - large torpedo. Oh, no. Not the large torpedo, but sea till a knee. Now as a matter of fact of question. Do you read my books? Do you like my writing? Yes?! Xm. Everybody like! Maybe, I have to read my books too?

What our friends, Beatles Fans think about this page...

Stas, Lipetck, Russia: Hello Irina, You pretty, this page is beyond compare!

Tygr, Dnepropetrovsk, Ukraine: Dear Beatles fan! I like your creativity very much. If you make something new please let me know.

Do you want something to say? Let your words come out! Drop me a short message to my Email.

If you plan to come back later...
Please remember this page -
URL: https://usa2017.inumo.ru/beatles/ussr.html 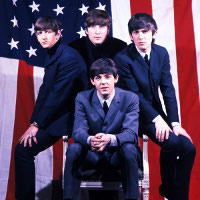